Following a competitive Tender process, Eco∼tech Systems were awarded the Contract to completely refurbish two of the four Reed Beds which formed part of the existing treatment process at Kingstone & Madley WwTW. All four Reed Beds were constructed in 1987 and had substantial plant growth and sludge deposits. 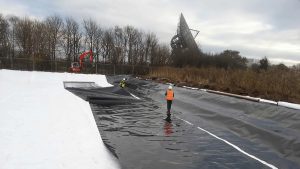 Following a topographical survey and extensive site investigation, a construction management plan was developed to remove the existing plants, vegetation, soil fill and sludge from within the beds. The works were undertaken utilising excavators positioned on top of “Bog-mats”. These mats provided a safe and stable platform for the excavators during this section of the refurbishment. All excavated materials were temporarily stored in a “holding area”, allowing the material to dry prior to reuse within the new landscaping features to be completed on site.

The reduction in the transportation of waste materials off site enabled the Client to realise significant cost savings and eliminated the requirement for waste materials to be taken to landfill.

Following the excavation of the media from the beds, together with the existing lining materials, the re-profiling of the existing basal layer and batter formations were then executed; the new and exacting formations then formed the necessary contours paramount in the effective operation of the latest process design. 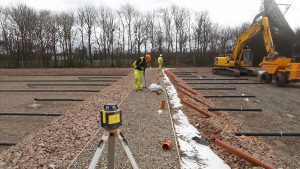 Eco∼tech Systems completed the works on a fully operational Kingstone & Madley site, liaising throughout the Contract with both Imtech and Dŵr Cymru Welsh Water Project Managers, ensuring that minimal disruption was caused to the works during the Contract. All site works were completed to programme and without incident.

A new and more robust geomembrane system was installed onto the re-engineered formation prior to the placement of the aeration matrix and collection pipework. The placement of 2,000 tonnes of specially sourced aggregates was undertaken meticulously, being installed to exacting levels utilising the latest laser level technology, prior to the installation of the effluent distribution pipework arrangement.

Qualified Banksman were deployed during the extent of the works to enforce strict aggregate delivery procedures ensuring vehicles were controlled during all reversing, turning and tipping operations.

A stone dressing system was applied to the batter profiles to protect the lining system and breather pipe network; works were completed with the installation of timber edgings and MOT Type 1 paths which were dressed with an aggregate finish. During site works a comprehensive, well designed and managed “Over-pumping” system was employed to control both the flows through the works and the general groundwater encountered during excavation.

All temporary works consisting of the re-location of existing services / installation of underground pipelines / construction of directional flow management / splitter chambers / stilling plates / weir plates covers and handrails were completed during the “Over pumping” operation.